The Battle of St. Julien by Kate Colquhoun…

I don’t intend to subject too many women writers to field punishment, primarily because far more talented people are casting a critical eye towards them and their work through projects such as Canada’s Early Women Writers.

However, there was one poet I can’t help but spend some time on, and I began looking into her work as soon as I came across a reference to her in Jonathan Vance’s brilliant Death So Noble: Memory, Meaning, and the First World War.  He writes:

“Indeed, Canadians demonstrated a long memory when it came to the war’s excesses.  Despite later Allied experiments with poison gas, Canadians never forgot that the Germans had used it first.  In 1928, Vancouver poet Kate Colquhoun decried the ‘foul methods’ that Germany resorted to at Ypres in 1915 when they could not win by fighting fairly” (Vance, 24).

Ever heard of Kate Colquhoun?  Me neither, and we’re related.[¹]  I found her page at the CEWW site here, which contains as much biographical information as one is ever going to find, as well as her photograph.

Try as I might, I couldn’t find a copy of Colquhoun’s The Battle of St. Julien & Other Poems online anywhere.  We’re going to fix that here.

The Battle of St. Julien & Other Poems is an eight-page poetry chap book published by Ryerson in 1928, in a run of 250 copies (three of which are now housed at the Vancouver Public Library; a handful of other copies are scattered throughout academic libraries across the country).  Ryerson published a series of poetry chap books during the period, of which this is one, ranging in price from fifty cents to one dollar; Lorne Pierce was the general editor overseeing the series.

There are no copies for sale at the usual online bookstores, and given how fragile this little book is, I’d say it’s extremely unlikely you’re going to find a copy.  If you do, get in touch and brag about it.

There are fifteen poems contained in the slim volume and two deal with the First World War: the titular Battle of St. Julien, as well as  Who Dies for Freedom Lives.

Taking Vance’s cue, I too thought this poem indicative of the lingering Canadian attitude to German atrocities (which it undoubtedly is), but having looked into Colquhoun’s personal connection with the war, her attitudes are almost certainly as informed by the first-hand experience of her brothers, coupled with the frustration of being on the home front waiting for news.

Kate Colquhoun had three brothers, two of whom served in the First World War.  Her elder brother William Gourlay Colquhoun was a notable Canadian solider, and his experiences from 1914-18 must have put his family through the wringer.

Lieut.-Colonel W.K.G. Colquhoun, M.C., Commanding Officer, PPCLI. Taken from the frontispiece of the April, 1937 edition of “The Patrician.” Vol IV, No. 2.

W.K.G. “Shorty” Colquhoun (he was 6’7″) joined the PPCLI as a Lieutenant on the 8th of August, 1914, and was one of the original officers when the regiment sailed overseas.

Colquhoun became the battalion sniping officer, and formed a “corps d’elite of marksmen to cope with the enemy snipers at St. Eloi in January, 1915.”[2]

On the night of February 27th, 1915, Colquhoun was “sent forward to examine the ground over which he would lead his troops and to verify all possible routes from which the enemy might be able to counterattack….  Colquhoun made two reconnaissance sorties that evening, going out a second time before midnight with the battalion second-in-command, Major Hamilton Gault.  During their expedition the two separated at one point, and, while exploring in one of the German communication trenches, Lieutenant Colquhoun was captured.”[3]

On this very same day back home in Canada, the Toronto Globe reported in a page 5 story that Kenmuir Watson, an NCO with the regiment, had written home to his family claiming Colquhoun “has been recommended for the Victoria Cross for carrying a wounded soldier to safety while under fire.”

Kate and the rest of the family must have been proud as hell.  But then in early March the family was informed he was “missing” and his name was amongst those listed as casualties in the March 4th issue of the Globe: Colquhoun was presumed dead.  Some weeks later word filtered back to Canada that he was alive, being held prisoner in Mainz, Germany and later at the Holzminden camp, where he played a part in the planning of the famous tunnel escape.

His earlier feats of bravery under fire were not quite enough to merit a Victoria Cross, but word filtered back that he been awarded a Military Cross. 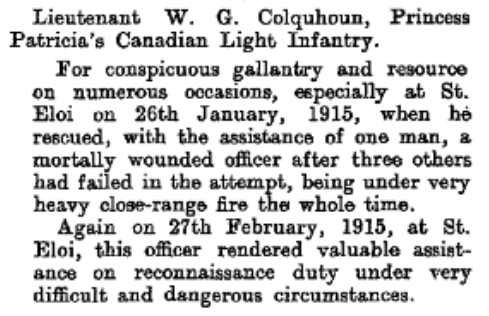 This was Canada’s first Military Cross of the war.  In June of ’15 he was mentioned in despatches (and would be mentioned again in 1920).  It couldn’t have been a pleasant thing to be awarded an MC and officially feted for bravery while in German captivity.

Immediately after the armistice, Colquhoun was also “brought to the notice of the Secretary of State for gallant determination in attempting to escape from captivity.”[4]  In the 17-part CBC radio series, an H. Niven from the PPCLI claims that Colquhoun escaped from prison 17 times, but was always caught.[5]

Several sources online mention that Colquhoun came home in November 1918, but that was “home” in the sense of being released from a POW camp.  He returned, along with the rest of the 4th Battalion in late April of 1919.  As reported in the Toronto Globe of April 19th, Colquhoun was one of just six men from the battalion to be taken alive as a prisoner during the war.  To put that number in perspective, W.L. Gibson’s “Records of the Fourth Canadian Infantry Battalion in the Great War, 1914-1918,” published in 1923, states a total unit strength of 302 officers and 5,261 other ranks for the 4th during WWI.  Of 5,563 men, only six, (SIX!), were taken alive as prisoners of war. 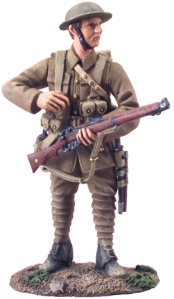 Perhaps when we read Kate Colquhoun’s two war-themed poems in The Battle of St. Julien we should consider the sister who for a month thought her brother was dead, eventually to discover he was imprisoned in Germany.  “Shorty’s” captivity had to have influenced Kate’s perception of the war, especially as both dragged on into 1918, when several Canadian prisoner of war memoirs appeared, detailing varying levels of barbarous treatment at the hands of their German captors.

1918 appears to have been the high-point for POW memoirs, such as J. Harvey Douglas’ Captured: Sixteen Months as a Prisoner of War (1918), Edward Edwards’ The Escape of a Princess Pat (1918), Frank MacDonald’s The Kaiser’s Guest (1918), Fred McMullen and Jack Evans subtly-titled, Out of the Jaws of Hunland (1918), Ivan Rossiter’s In Kultured Kaptivity: Life and Death in Germany’s Prison Camps and Hospitals (1918), Nellie McClung’s Three Times and Out: Told by Private Simmons (1918), Jack Evans’ Sixteen Months in Germany and The Black Hole of Germany in the March and April 1918 issues of MacLean’s, respectively.  Early 1919 saw a similar slew of titles, my favourite being Arthur Gibbons’ A Guest of the Kaiser (1919).

Now I cannot categorically state that Kate Colquhoun read any of these memoirs, but if you had a brother in captivity it stands to reason that you’d gravitate towards such titles (and it also stands to reason that the press would have carried breathless excerpts detailing the worst German excesses from these memoirs).  Having read many of these accounts myself, I’ve been forced to reexamine some of the ‘live and let live,’ Christmas-truce attitudes that seem to be a common thread in the revisionist accounts of the war.  But, as Desmond Morton points out in Silent Battle (1992), “as in all armies, ferocity to the enemy increased with distance from the front line, and the guards and overseers assigned to prisoner-of-war companies were no exception” (91).   So perhaps these cases of German abuse are emblematic of a specific part, rather than the whole.

I tend to view Colquhoun’s poetry, specifically The Battle of St. Julien, in much the same light: representative of a very select sub-group, as opposed to being typical of a larger national attitude.  In his conclusion to Silent Battle, Morton writes “the prisoners’ own bitter memories were eclipsed by the desire to forget and a postwar belief that any talk of German brutality was a resurrection of wartime lies” (156).  Perhaps Colquhoun’s is less a lingering attitude than a reminder a decade on.

This entry was posted in Uncategorized and tagged Jonathan Vance, Kate Colquhoun, Poem. Bookmark the permalink.

5 Responses to The Battle of St. Julien by Kate Colquhoun…