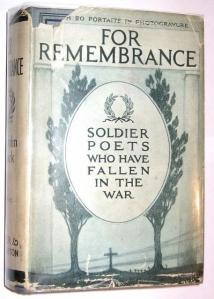 This 1st edition with dust jacket is available from C.A. McIntosh Books via Abe.

I recently picked up a copy of For Remembrance: Soldier Poets Who Have Fallen in the War by A. St. John Adcock.  Published by Hodder & Stoughton in 1918, then revised and expanded for a 1920 edition, I opted for the latter, which comes in at 310 pages.

The book is mostly a series of brief biographies of some sixty-five poets that were killed during the Great War, along with some excerpts of their more notable work. Twenty-five photograph plates have been tipped in throughout the text (so if you fancy a copy, take the time to browse through it to make sure they’re all present).  Adcock makes some general observations on various themes in the poetry of the war, but as the title suggests, this is a memorial volume rather than a work of serious literary criticism.

Two Canadians are included in the roll of poets: John McCrae and Frank S. Brown. McCrae rates one of the larger examinations in the text, coming in at eight pages, while Brown was granted a more typical two pages (neither man has their portrait included amongst the tipped-in plates).  I expected to find Bernard Freeman Trotter, author of A Canadian Twilight at least mentioned in the expanded edition, but alas no.  There are more grievous omissions though: neither Wilfred Owen nor Isaac Rosenberg rate even a mention.  Such is the nature of literary reputation. 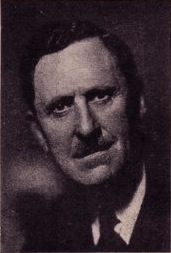 Wait.  Holbrook Jackson?  Really?  Anyone whose leg gets a tingle at the thought of books about books will know Jackson as the author of The Anatomy of Bibliomania (1930), The Fear of Books (1932), Of the Uses of Books (1937), along with a dozen or so other delightful and insightful books about books.  One of my favourite lines comes courtesy of the man: “your library is your portrait.”  That’s not bad.

So how does one of the world’s greatest bibliophiles come to edit a collection of a mere thirteen poems by an obscure Canadian soldier-poet?

Jackson was the editor, and later owner of T.P.’s Weekly, a cheap literary magazine most famous for serializing Joseph Conrad’s Nostromo, and featuring such writers as George Bernard Shaw, G.K. Chesterton, and H.G. Wells.

Jackson writes in the introduction, “In January last of the present year Sergeant Frank Brown called at my office in Covent Garden with a packet of poems under his arm.”

His name was not unknown to me, owing to the fact that he had submitted some of his work to the literary critic of the above paper, who had in turn drawn my attention to it. Brown had come to England with the first Canadian Contingent, holding the position of Sergeant in the Third Company of Princess Patricia’s Canadian Light Infantry.  At the time of our correspondence his regiment had proceeded to France, but the soldier-poet, much to his disgust, had been left behind, temporarily unfit through an influenza attack.  His first letters to me were written from Lark Hill Hospital, Salisbury Plain.

Fair, slight but sturdy, keen-eyed, self-confident but unassuming; such is my impression of the young soldier who came into my room on that grey January morning.  He was the type of the British soldier: healthy, cheerful, untroubled by mental subtlety or overweening ambition, but willing to square brain and brawn with the general effort towards the attainment of an end known to be righteous and certain.  All this was evident from the external view; but the intimacy of conversation revealed exceptional characteristics. It was evident that Sergeant Brown resembled the admirable average type of British soldier only by an effort of the will, born, probably, of an equally British and equally admirable objection to being thought remarkable.

On the three or four occasions upon which we met, I learned to value the mental qualities of this khaki-clad son of the Empire. His intellectual interests were wide, and, although backed up by a considerable bookish experience, they always sought a practical end.  He was an Imperialist, but no jingo word escaped him in my hearing.  On the contrary, his soldierly reticence was based in enthusiasm for personal endeavour.  “The Empire is kept going by character,” he said on one occasion, “not by shouting.”  He had read much in modern literature; liked Rudyard Kipling “where he resembled Whitman,” he said, and Whitman “where he resembled Kipling.”  Then he pulled himself up as though concerned at having convicted himself of a thing he loathed, namely, modern verbal cleverness.  I reassured him, knowing his robust tastes.  That was the man.  He would talk, long and well, but the note was sincere rather than brilliant, and generally impersonal. I failed to get him to talk about himself.  His two immediate wishes were to get to the Front, where his comrades were fighting with undying heroism, and to have his poems published.  Both wishes have now been gratified; but Sergeant Brown lived only to enjoy the first, and that only for a few brief hours, for he was shot during his first day in the trenches at St. Eloi, on February 3rd, 1915.

Brown’s father, Reverend S.G. Brown of St. Paul’s Anglican church in Almonte, Ontario, received a letter from the officer commanding the sector where Frank Brown was killed, one Captain Talbot M. Papineau (who later achieved some fame arguing with his cousin Henri Bourassa over Quebec’s role in the war through a series of open letters in the Montreal Gazette).  In the letter, Papineau states that on his first and only day in the trenches Brown “fired nearly eighty rounds at the enemy, probably as much as the rest of the Company put together, and undoubtedly attracted the attention of the German sharpshooters to himself.  About 3.30 that same afternoon he was struck in the head and died instantly and without pain.”

It just breaks your heart, doesn’t it?  Can’t you just picture a tough infantry soldier, held back from the fight because of flu, suddenly getting a crack at the front and throwing caution to the wind?  Brown’s over-enthusiasm coupled with his being surrounded by troops so new to war themselves that nobody told him to ‘tone it down’ led to his death.

Frank S. Brown was buried just outside Battalion Headquarters at Shelley Farm, just east of St. Eloi in Belgium, on the evening of February 3rd, 1915.  Though the site of his grave was known, Brown’s body was never found, and he is commemorated on panel 10 of Menin Gate Memorial for those that fell at Ypres and have no known grave.