This lovely, though somewhat chipped copy of Frank S. Brown’s Contingent Ditties arrived in the post this week from The Known World Bookshop in Victoria, Australia.

One of the things I’ve been struck by is just how dainty many of these collections of WWI poetry are.  This volume is not much larger than the image above, measuring just less than 4″x 7″ and is a decidedly pretty thing.  Each of the thirteen poems is preceeded by a blank verso facing a title-page, while the top of each printed page is adorned with one of a series of eight repeating illustrations.

Sorry the image is a little less than crisp; it has been blown up to more than twice its actual size.  Two of the eight images are less martial than the one above: one is a pattern of maple leaves, another the one below.

Brown was a Canadian you say?  Hmmm….lemme see….make sure the woodland scene contains beaver….why yes, squirrels and foxes would go nicely as well.  That should please the colonials….

I have a small but respectable collection of 1890’s literature, mostly published by John Lane’s The Bodley Head; these WWI poetry collections (Frederick George Scott’s In the Battle Silences is a similarly dainty, aesthetically pleasing volume) bear a striking resemblance to the small-press books of the Decadent era in terms of their physical characteristics.  Thick paper, wide white margins, a deckle edge.  Lovely.  I keep giving in to the urge to fondle it. 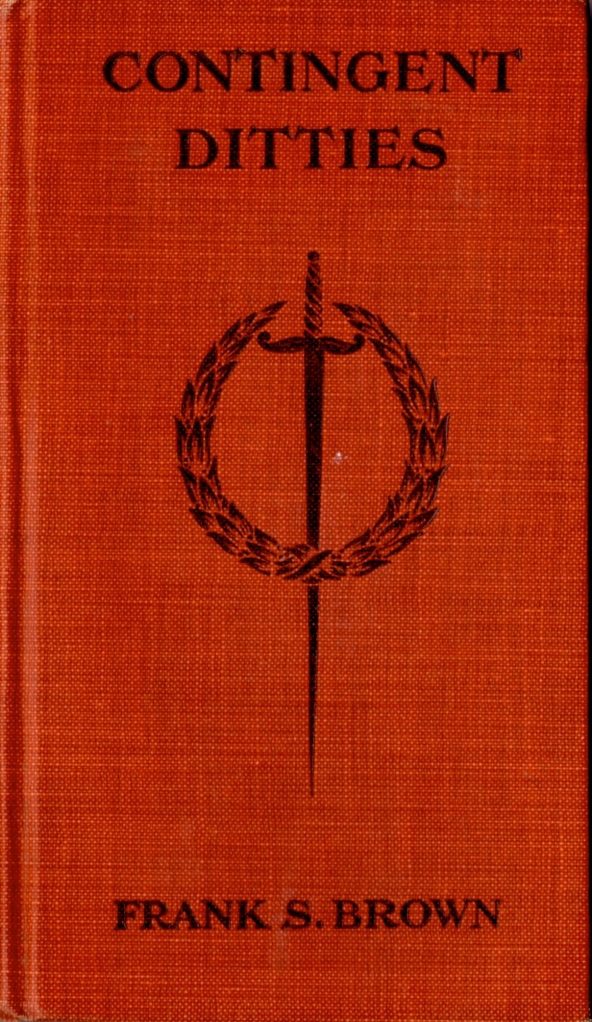 This book is available at the internet archive here.  I’ll post all the poems in the coming weeks, and elaborate on what little I know of the brief life of Frank Brown in subsequent posts.  There are a half-dozen copies on Abe in the $20.oo-40.oo range, should you be interested.

This entry was posted in Uncategorized and tagged Contingent Ditties, Frank S. Brown. Bookmark the permalink.