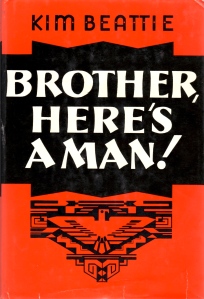 In late 1939, Kim Beattie sent the manuscript of Brother, Here’s a Man! to his agent in New York; for whatever reason the agent decided it was not worth paying the $2.50 duty on the parcel, and so left it languishing in the Post Office.  Beattie’s publisher Macmillan caught wind of the neglected book, rescued it, and published it May of 1940.

Brother, Here’s a Man! is a popular biography of Klondike Joe Boyle, at various times a New York boxing promoter, Yukon gold-mining millionaire, Canadian Colonel tasked with assisting Russia both before and after the revolution, and later, the unofficial ‘King of Romania.’  But I’m sure all my readers recall tales of his exploits from their always-exciting, never-dull Canadian history classes at school.

Boyle’s story is no less incredible than Lawrence of Arabia’s (though certainly less literary) and Beattie’s book is an enthusiastic account of Boyle adventures.  An introductory chapter has the young Joe Boyle running away to sea, only to be ‘Shanghaied’ and pressed into service on a merchant vessel in the East.  When the Captain has both his legs broken by a falling mast, and both the first and second mate are swept overboard in a fantastic storm in the Indian Ocean, Boyle single-handedly seizes control of the ship from a mutinous crew and after 29 days, guides the broken vessel to a safe harbour.  The incident became notorious –long before he returned to North America, Boyle’s parents had read about his naval exploits in the New York Post.  He was seventeen. 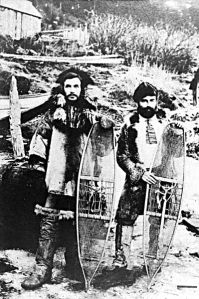 Landing in New York, Boyle fell in with the greatest boxers of his day, training with them and promoting their bouts.  Eventually this led him west, where he got the itch to try his hand at gold mining in the Yukon.  He and Australian heavyweight champ Frank Slavin, without a dollar to their names, got passage to the Yukon and after much fantastic struggle, established themselves in Dawson City.  A huge man with an indomitable character, in a climate that broke strong men, Boyle’s exploits in the North became legendary as he refused to be cowed by either the rough characters drawn to the frontier or the harsh elements of Canada’s North.  In January of 1899, Boyle left Dawson for the coast because the town was running critically low on supplies.  He traveled 500 miles by dog-sled in temperatures between -30 and -50.  Boyle’s feats of strength in the North are quite simply, incredible.  Even his lead sled-dog, a Timber-wolf Husky mix named Cronja, was famous: he is thought to be inspiration for Jack London’s White Fang.

Eventually, Boyle would bring industrial-scale gold-mining and timber producing to the Yukon.  He brought the first massive dredges to the Yukon, and though guile and back-breaking labour, Boyle became an incredibly wealthy man; by 1914 his wealth has estimated somewhere in the neighborhood of 13 million dollars.  He was the undisputed ‘King of the Klondike,’ and used his wealth judiciously: he was patron to a young Robert Service, and when war was declared, he raised a machine-gun company at his own expense.   Their collar badges were solid gold. 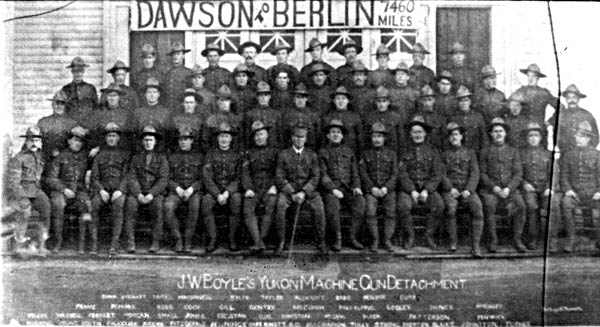 Boyle wasn’t a military man, so though he raised an MG Battery he wouldn’t command them, and much to his displeasure the unit was eventually broken-up and the men were absorbed by other outfits.  But what a group of men: “every officer, and twenty-four men, were decorated for bravery, the record percentage of honor medals to go to a unit of the Canadian Army in the Great War” (Beattie: 114). 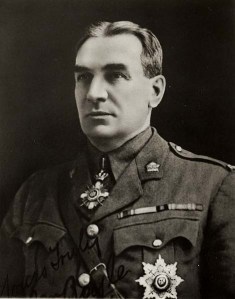 Given his expertise in the logistics of heavy industry, Boyle was made a Colonel and sent to Russia to reorganize their railway system and impose his own particular brand of colonial efficiency on the Czar’s antiquated and inefficient transport system.  Blunt as a point of pride, Boyle proceeded to get the trains running on time, bullying everyone from station-masters to Archdukes, while getting into many adventures in pre-Revolution Russia.  In one instance Boyle decided to punch it out with a mob outside one of the Czar’s residences, (mostly to prevent the Cossack guards from slaughtering them) by slugging one agitator to the ground after another, while the Czar watched comfortably from inside.  The next day Boyle was presented with an engraved sword by Nicholas II for his efforts.  Post-revolution, when 10,000 train-cars were backed up in Moscow marshaling yards and the people were starving, Boyle stormed into Red headquarters and demanded a meeting with Lenin.  V.I. gave Boyle unlimited resources to fix the problem, which he did in 48 hours. 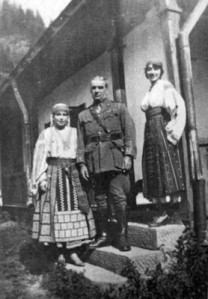 Queen Marie of Romania on the left, taken in Bicaz, 1918.

From mad, chaotic Russia, Boyle turned his attention south to Romania, who had joined the war on the Allied side in 1916.  After a series of military setbacks which led to Austro-German occupation of territory in north and west of the country, the Romanian crown jewels, gold and cash reserve, archives and currency printing presses were sent to the Kremlin for safe-keeping.  When Russia imploded, Romania panicked –and Boyle decided to retrieve the Romanian treasures.  Along with a British spy, Boyle negotiated for the return of everything except the gold, loaded it into his private rail cars (which had belonged to the Czar’s mother) and literally stormed his way through five distinct rebellions/counter-rebellions of revolutionary Russia on his way to delivering the goods back to the Queen of Romania.  She became quite fond of the big Canuck; many speculate they had an affair (which I believe is unlikely).

Boyle had many more adventures throughout Russia and Romania in the closing days of the war, and in the reconstruction years that followed.  He negotiated the first peace treaty of the Great War (between Russia and Romania), rescued about 400 kidnapped members of the Romanian aristocracy, attempted to rescue the dowager Czarina (she met with Boyle several times, but refused to leave Russia), browbeat Herbert Hoover in person to immediately divert aid to Romania, did the same with the Canadian PM Robert Borden, caused a stir at the Paris Peace Conference when he showed up with the Queen of Romania, and took every opportunity, it seems, to quote at length from Robert Service’s Klondike poetry to any and every member of European Royalty that needed his help.  What a man!

Pierre Berton, the Canadian popular historian, described the Beattie’s Brother, Here’s a Man! as “exclamatory,” another reviewer used the term “breathless.”  These are fair descriptions, but shouldn’t be read as slights against Beattie’s accomplishment.  Brother… is a ripping great read, full of high adventure as he charts the exploits of an extraordinary man.  There is no index, no footnotes, no bibliography: in short this is no academic biography.  But unlike the more scholarly accounts of Boyle that have been published in the intervening years, Beattie actually had the opportunity to speak to many of those concerned while writing his book, took their stories about Boyle’s exploits, separated the wheat from the chaff, and produced a biography that reads like a thriller.  To top it off, the Queen of Romania wrote a forward to the biography from her deathbed; reading the praise she heaps upon Boyle and the language she uses to describe him, one understands just why there were rumours about the two.

There are one or two copies for sale on Abe, in the 50-100 dollar range, but eagle-eyed stalkers of used bookstores should be able to find a copy for 10-15 dollars.  It’s also widely available in Canadian public and academic libraries.  Do find a copy –it’s great fun.

This entry was posted in Uncategorized and tagged Brother Here's a Man, Joe Boyle, Kim Beattie. Bookmark the permalink.