Posted on September 8, 2012 by James Calhoun 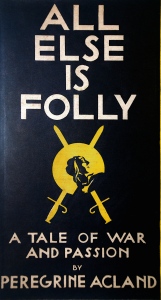 It has been a good week here at Field Punishment No. 1.  I’ve recently discovered several newspaper articles about and by Peregrine Acland, I sniped an auction on ebay for a hard to find edition (with jacket no less) of Folly, Amy Tector at L&AC got in touch and then sent me a paper of hers that has eluded me, George Simmers from Great War Fiction hunted down the hospital Acland was treated at for me, and several enquiries sent out to various sources all came back in rapid succession.  It’s been a dream week on the research front.

As good as this week has been, this morning a real treat was waiting in my inbox, courtesy of the Bertrand Russel Archive at McMaster University in Hamilton, Ontario.

In the fall of 1929, Acland sent a copy of All Else is Folly to (you guessed it) Bertrand Russell.  If you’re reading this blog you’re undoubtedly familiar with the man, but his wikipedia entry is here if you fancy a quick refresher.

The whereabouts of Acland’s letter to Russell are unknown, but Russell’s reply is housed in the aforementioned archive.  And here is a copy:

Here it is as a PDF:

Being on a lecture tour, I have not hitherto had time to write + thank you for your kindness in sending me your book “All Else is Folly.”  I read it with much interest + admiration.  You are quite right in thinking that your ideas + mine are closely akin.  I am grateful to you for giving me the chance of reading the book, which contains much that is beautiful + original.

Some of you might recall McClelland & Stewart used a promotional blurb from Russell during the ad campaign for Folly.  The blurb is taken directly from this letter.

Of course, Acland was working in the world of advertising when Folly was published, but I’m amused at how cheeky it was to use a line from Russell’s letter for a blurb, while at the same time using a quote from Robert Borden (Canada’s Prime Minister during the war) in another newspaper advertisement.  The simultaneous appeal to both sides of the aisle, those for and against the war, is the sort of thing only an ad-man or a political hack could pull off; thankfully Acland was both.

Also at the Bertrand Russell Archive at McMaster is a copy of Folly, though the archivist who was kind enough to send this letter along tells me it wasn’t Russell’s copy.  There’s a pity, but it means his copy is out there somewhere, waiting for me to track it down.

Finally, I’ve mentioned this before, but as someone who takes pride in hunting things down allow me to suggest you deliberately mis-spell the things you’re looking for once you’ve exhausted the usual methods.  This letter was filed under “Peregrine Ackland” at McMaster (they’ve now corrected it). I’ve found quite a few things this way (especially on ebay & abebooks) and if you can spare the time, it’s often how you find a gem.

This entry was posted in Uncategorized and tagged All Else is Folly, Bertrand Russell, McClelland & Stewart, Peregrine Acland, Robert Borden. Bookmark the permalink.