The War Comes Into its Own… 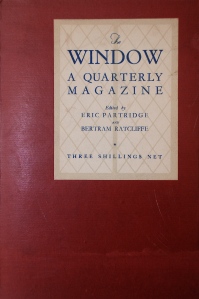 In January of 1930, Eric Partridge and Bertram Ratcliffe began publishing a quarterly magazine called The Window.  In the opening editorial, they write, “the general ‘idea’ of The Window is to provide a periodical that will please intelligent people: it is not meant to afford a secret delight to the ultra-highbrows and a vexation to their betters.  This quarterly will contain stories…readable satire mainly in prose, essays, and articles on matters of general (not technical) literary interest.”

Four issues of The Window appeared in 1930 and then production ceased; I am led to believe this was the editor’s original plan, but may be mistaken.  Deliciously middlebrow, it’s a charming literary artifact with the sort of ‘no-nonsense’ approach befitting a literary publication edited by two former infantrymen.

I simply must spend a moment on the editors because these are interesting fellows:

Bertram Ratcliffe was among the first British soldiers wounded in the war in September, 1914, at the battle of the Marne.  He was taken prisoner, and spent the next three years in Ingolstadt in Bavaria.  His mother smuggled a compass to him in a POW care package of toffee, and he escaped, being the first British POW to make his way back to England.  That earned him tea with the King and a Military Cross.  In 1935 Faber and Faber published Ratcliffe’s account of his war experience titled Idle Warriors.  Exceptionally rare and collectible, if you find a copy for less than a thousand dollars, you’ve found a prize.

Eric Partridge, a New Zealander, served with the Australian Infantry in Egypt, Gallipoli, and was wounded at Pozières on the Western Front.  After the war he became a lexicographer, and wrote some of the best known books on slang in the English language: his A Dictionary of Slang and Unconventional English, published in 1937, has gone through eight editions and is still in print.  Partridge was also a publisher, and in 1930 published Drift by James Hanley, a Briton that jumped ship in Halifax to enlist as a teenager in the Canadian Expeditionary Force.  Hanley is probably better known in these parts for his self-published novella The German Prisoner, one of the high points of Canada’s war literature.

In Volume 1, Number 1 of The Window, there is a thirty-two page essay entitled The War Comes Into its Own, written by Eric Partridge.  The essay is an appraisal of the war literature published in English up until Christmas of 1929, and is one of the more clear-eyed contemporary examinations of the genre.  Many of the authors they praise have become the greats of the First World War:  Zweig, Alverdes, Junger, Barbusse, Bluden, Graves, etc.  And they have some praise for Peregrine Acland:

A month later [after the publication of Richard Aldington’s Death of a Hero], All Else is Folly appeared.  In Thus Spake Zarathustra, Nietzsche superhumanly enunciated that “man shall be trained for war, and woman for the recreation of the warrior; all else is folly.”  The author, Major Peregrine Acland, was an officer of infantry in the First Canadian Contingent.  It is the best war novel that has yet come from the Colonies.  It deals with the life of Canadian infantrymen in the trenches in France and, in particular, with Alec Falcon’s experiences of love and war: in both he bore himself as a man; in neither was he very lucky.  This is a good story, sanely, energetically written, and it contains a very telling description of a night-reconnaissance (really a patrol with a single object in view) and an even better description of a great attack and the hero’s plight when wounded.  Falcon came to hate war, yet in 1924 he felt, at the march-past of his old regiment, that, “with the skirling of the pipes in his ears he would have signed away his liberty, his life, for another war.  It wouldn’t have mattered much, what the was was about.”  It is, one supposes, just as well for a nation that it includes individuals like Falcon.

As I get more time, I’ll type out the essay in its entirety and post it here as a PDF (or some such) for the curious.

This entry was posted in Uncategorized and tagged All Else is Folly, James Hanley, Peregrine Acland, The Window. Bookmark the permalink.