Excerpts of Peregrine Acland’s All Else is Folly appear in at least two widely-available anthologies of Canadian War writing. 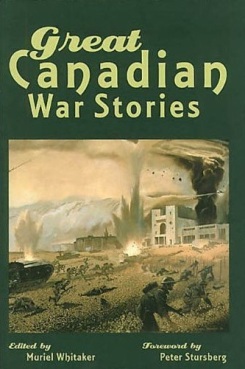 This is the better of the two anthologies in every respect.

Acland’s contribution comes from part II, chapter III, pages 257-268 of the 1st Canadian/American edition  of All Else is Folly, and is entitled Zero Hour in Whitaker’s anthology.  There’s also a nice little bio on both Acland and the battle described by him.

This book is widely available in public libraries and can be purchased here.  It’s an ideal introductory text to Canadian war writing.

The second anthology is We Wasn’t Pals: Canadian Poetry and Prose from the First World War, edited by Barry Callaghan and Bruce Meyer.  Exile Editions, Toronto, 2001.

Acland’s contribution to this anthology is from part II, chapter IV, pages 269-305 (i.e., the entire chapter) of the 1st Canadian/ American edition of Folly.

This book can be purchased here.

There are some merits to this collection, but unfortunately they aren’t to be found in the section devoted to Acland.  My first tip-off was the biography in the back, which I’ll quote in full.

Acland, Peregrine (dates unknown).  Acland served in a Montreal Highland Regiment and survived the war and lived during the 1930’s in Toronto.  His novel, All Else is Folly, was published in 1929.  In his introduction, Ford Madox Ford called it “the first really authentic work of imaginative writing dealing with the War to come out of one of the great British Dominions.”  Prior to the war he had written a novel, The Reveille of Romance.

This is from 2001, recall.  Anyway, the editor of the previous anthology, Muriel Whitaker did some research and got her facts right.  This anthology is not so rigorous.  Note there are two glaring errors –Acland served in the 48th Highlanders out of Toronto & Reveille is a poem, while his ‘dates’ were certainly well known to Whitaker.

I decided to trawl through the text presented in We Wasn’t Pals and compare it to the first edition of All Else is Folly.  There are 26 errors.  Most are trivial: the editors have substituted grey for gray six times, Shell Hole or shell hole (occasionally it’s capitalized for no apparent reason) for Acland’s shell-hole, honour for honor, etc.  Not a big deal.  But it pisses me off to no end that the editors decided to remove Acland’s “….” in three places, italicize a phrase not found in the original, change “some one” to “someone” and have a hole appear in the “top” of a German machine-gunner’s head, as opposed to the “back” of his head, as it appears in the original.

As a footnote, of the four editions of Folly published in 1929, three (the two US editions & the Canadian) are exactly the same in everything but the publisher’s badges, dust wrappers & ads.  The UK edition is packed away at the moment; I’ll check it fairly soon to see how it stacks up.

We Wasn’t Pals has an introduction by Barry Callaghan and an afterword by Margaret Atwood, so one would assume that this edition is the one to have of the two anthologies.  That assumption would be wrong.  If you’re a teacher, Muriel Whitaker’s Great Canadian War Stories is the anthology to seek out.  Wholesale discounts are available at the University of Alberta Press website here.

This entry was posted in Uncategorized and tagged Great Canadian War Stories, Peregrine Acland, We Wasn't Pals. Bookmark the permalink.